“The Word became flesh and made his dwelling among us.” John 1.14

We sometimes forget how radical the Christmas message is. We get trapped in the sentimental packaging of western commercial celebrations. But we can grasp again the majesty of this vision. Not only did the great Creator God become a human being; but the Apostle John, in the introduction to his Gospel, drew on the ancient Greek philosophical notion of the ‘Logos’, which is translated as ‘The Word’.

The Greeks believed there was a basic rational principle, which underlies the whole universe, holding it together, and integrating it into a meaningful whole. They didn’t know exactly what it was, and it threatened to remain an abstract concept. But John writes that this Logos, which ties all things together, is actually personal, and loves us. Not only that, but this Divine Being also became flesh, took on himself the material stuff of the physical creation, in order to enter our human experience, and save his fallen, rebellious, people, who deserved nothing of the kind – which is Grace, a free gift.

To us, this seems normal enough. But to people at that time, it was revolutionary. For them, the material world was evil, a prison. Some even believed it was created by a second, evil, god.  Their religions therefore aimed to set them free, from this bondage, so they could take up a purely spiritual existence. Muslim objections to Christianity often reflect this ancient prejudice.

One of their great objections, for example, is that God is infinite, and the Infinite could never possibly become Finite. This therefore is something that God, Allah, cannot do; which is strange for a faith with such an all-powerful image of the Divine, that here is a limit on Divine power. For Christianity, however, there is no limit to God’s power. If he wants to become human, finite, he can.

But Muslims also ask, what to them seems a fool-proof question: did Jesus defecate? Because for them the Divine could not, literally, soil itself with excretion. But for us, this is the glory of Christianity; that our Saviour recapitulated the whole of human experience in himself. Only by experiencing this could he save it, being both fully Divine and fully human. As the old saying puts it, “what is not assumed is not redeemed”. Jesus assumed human nature, so he could save it, and us.

Religions like Hinduism and Buddhism share the same anti-material prejudice. But for them, matter is not only inferior, but illusory; it doesn’t even exist. The aim, through meditation and yoga, for example, is to realise this, and thereby enter nirvana, a state of non-existence or absorption into the One, in which we as individuals no longer exist. In contrast, the Bible teaches that our bodies are real, and precious. So, it matters how we treat ours and other people’s bodies. The incarnation of God in Christ shows us that matter matters, and therefore we matter.

Christmas is the announcement of this Good News. 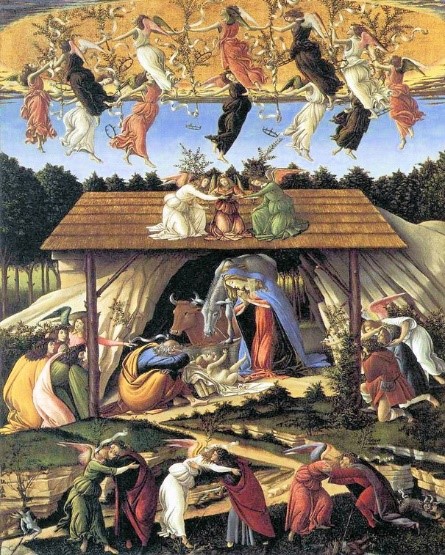